Welcome to Marsden's Shoes.  We have been a family owned and operated store since 1947.  After 71 years, "Chuck" has relinquished the reigns to another family in the footwear business. As new owners, we promise to maintain the same service, integrity, and quality footwear as the previous owners.  Current owners boast a 56 year history in the shoe business with the same mission as "Chuck".

We accommodate specific needs to patients through customization of OTC footwear.  We also offer Pedorthy services with 3 Certified Pedorthists on staff.  Marsden's accepts Medicare and Kaiser. Professional shoe fitters on staff are always eager to offer the perfect fit. Whether you require simple modifications to existing footwear or custom made shoes, we have a full staff on premises to provide for your every need.  Marsden's welcomes all inquiries. Do not hesitate to call us at 562 698-7281. Remember, our body relies on feet to maintain their movement and stability.  Take care of your feet, and the body has a much better opportunity for good health! Marsden’s has specialized in: orthopedic, therapeutic & comfort footwear –stocked in many brands, styles, widths & sizes; foot orthotics; ankle foot braces; as well as other foot health products including a wide selection of extra depth shoes for diabetic and arthritic patients. Our facility includes an in-house lab where custom-made orthotics are fabricated, a workshop where custom shoes are made, and a shoe repair shop. Prescription footwear customers are seen in exam rooms by our ABC Board Certified foot and ankle specialists and we have an expert insurance billing department.

Marsden's has more than 56 years experience in fitting shoes and prescription footwear, working with patients and their prescribing doctors to accommodate specific orthopedic and corrective footwear needs.

When the profession of pedorthics began to emerge in the late 1950s, after World War II and an outbreak of polio had created a need to deal with foot trauma through footwear, Marsden’s Shoes developed a specialty in furnishing prescription-based footwear for which it soon came to be nationally recognized.

Pedorthics was defined by the newly formed “Prescription Footcare Association” (PFA) as: the design, manufacture, modification and fit of footwear, including foot orthosis, to alleviate foot problems, caused by disease, overuse, congenital defect or injury. Chuck joined the PFA and in 1974, after its founding directors had established the American Board for Certification in Pedorthics (BCP), Chuck Marsden became the 27th BCP Certified Pedorthist (C. Ped.) in the nation.

Later the BCP was amalgamated into the American Board for Certification in Orthotics, Prosthetics and Pedorthics, the national certifying and accrediting body for the orthotic, prosthetic and pedorthic professions which sets the standards for practice in each of those specialties. Today, having credentialed more than 14,000 individuals, the ABC is the world’s leading accreditation organization for those professions.

PFA founders and active members developed relationships with staff at the American Diabetes Association, wrote a physician’s manual for the care of the diabetic foot and engaged in political advocacy to get increased support for diabetic foot care in the form of amendments to the federal Medicare program. 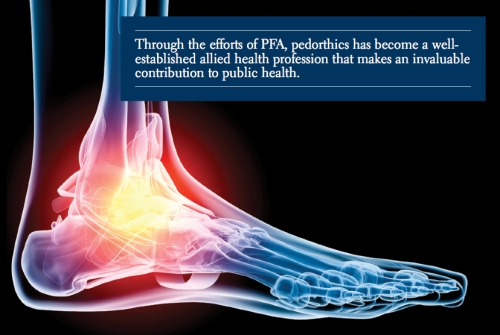 Professional education is a core part of the PFA mission. Members have initiated and sponsored university level pilot courses in Pedorthics and organized talks before doctors at hospitals and regional medical centers to spread the message that pedorthists can give physicians a range of conservative – or non-surgical –treatment options.

Like PFA founders Seymour Lefton and Morton Hack,  Chuck traveled to Carville, Louisiana to study the treatment of the diabetic foot with Dr. Paul Brand who was Chief of Rehabilitation at the United States Public Health Service (USPHS) Hospital National Hansen’s Disease (leprosy) Center at Carville where he had established a well-equipped and well-staffed research unit to study the complications of insensitive hands and feet, their prevention and management. Dr. Brand’s innovative methods for prevention and management of plantar ulcers later came to be extensively used in the treatment of patients with diabetes mellitus – saving limbs and lives.

As of 1978, when USC Professor of Orthopedic Surgery F. William Wagner, Jr. asked Chuck to be a consultant & staff member at the newly established USC / Wagner Institute, the Marsden’s Shoe Co. was widely known for its specialty in serving the prescription footwear and pedorthic needs of diabetic patients.

Dr. Wagner was internationally known as the developer of the “Wagner Grading System for Diabetic Foot Infections” that grades diabetic foot ulcers based on depth of tissue penetration and necrosis and is used by orthopedic surgeons as a guide in the diagnosis, antibiotic therapy, non-surgical treatment, and surgical treatment of the foot ulcers that occur in diabetic patients. One of the Wagner Institute’s research goals was to develop optimal strategies for reducing the incidence of lower extremity amputations and limiting diabetic foot problems.

Dr. Wagner’s testimony before the U. S. Congress greatly contributed to the authorization of a demonstration project under which Medicare would pay for therapeutic shoes for individuals with severe diabetic foot disease. Marsden’s Shoe Co. was among a select group of footwear suppliers nationwide during the initial demonstration phase of that project which was enacted into law as a Medicare benefit in 1993.